As the twin engine Dash 8 slowly climbed above the beautiful valley I sorely looked down upon a river that I’d just walked out of before having to head to the airport to catch my flight. It will be another year, if I’m fortunate, before I’ll cast a fly here, wander these valleys, gaze upon these towering mountain peaks and immerse myself in these waters in pursuit of a mythical fish, a steelhead. At my age, that’s becomes a somber thought, yet I’ve been incredibly fortunate to fish for steelhead in British Columbia all the years that I have knowing many don’t have such opportunities.

Not long after take off my view was lost among a layer of low hanging valley clouds; something that we could have used more of during my stay, yet the pleasant sunny weather I enjoyed left little room for one to complain. No longer visually distracted my time here began to reel through my head. There were many notable moments, yet none more vivid than that last grab I had just before reeling in for the last time.

I’ve left this country before, sulking over lost opportunities, and  failed encounters.  They seem to linger as much as any steeheading recollection, especially when they occur on my last day or after suffering through a number of fishless days. It’s part of the game here when chasing these often elusive fish. They are moments that mess with my mind like only steelhead and swinging flies for them can.  Over the many years it hasn’t gotten any easier.

For those not familiar with steelheading there is a unique vernacular that accompanies these anadromous wanderers. Boils, grabs, pulls and squirts being some of the more common. None of them generally lead to a successful hook up if being referenced, although they can.  Those that don’t can get under your skin, especially those sudden grabs that take a few clicks off the reel, yet the reel goes silent just as quickly, eventually the spey line dangling  limp below you.  Over three decades of chasing these fish I’ve had my share of them all, and this years trip was no exception. 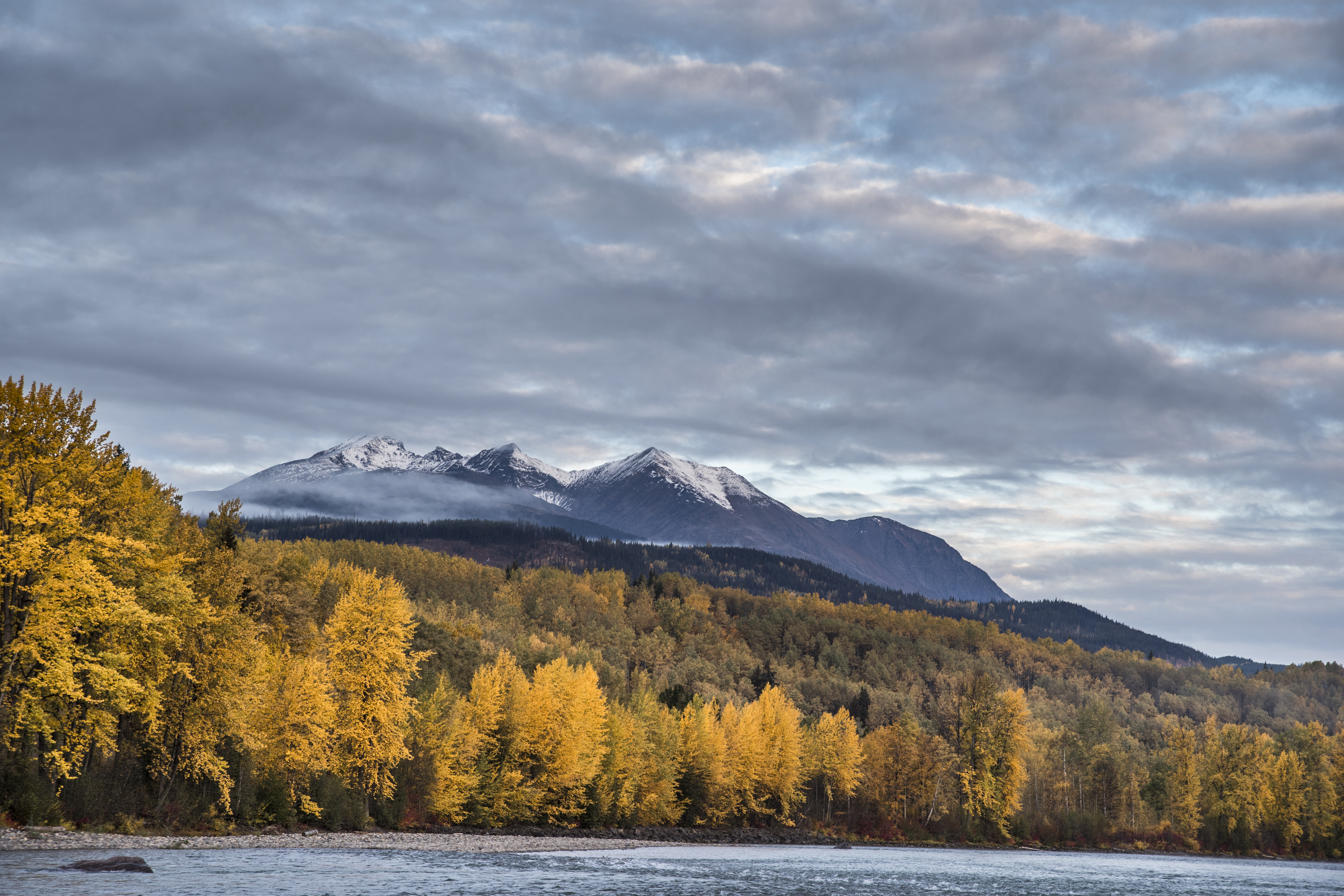 I was fortunate to get a late flight out of BC and had the last morning and early afternoon to find a fish. As the sun crest the eastern horizon the riverside poplars and cottonwoods burst into an array of fall color. It was another unseasonably mild day to be on the river. In late September they don’t get much more pleasant, and that only added to the angst of having to go home later today.

Two fishy tailouts into my morning swing without a sniff had me resigning to the notion that I may not find a fish, which isn’t unusual for steelheading or the waters I was fishing on this day. This is a game of hope and optimism after all, and these fish can and do elude even the most ardent steelheader, and depending the individuals demeanor sometimes for a long, long time. Given the day before treated me so well, I was content and pleased to just have the extra time here, and take what the river would give while doing my best to fish good water well.

After a slow walk under towering cottonwoods to the next piece of water I came to a classic run that I hadn’t stepped foot in for a few decades. Under the extreme low water conditions I barely recognized the water I was hoping to fish. Most of the structure was high and dry or so shallow it left little if any decent water that would hold a fish. Like much of my fishing this week, due to the water conditions, I had to change my game plan. So, before beginning I took a stroll to the end of the run to better read the water.

At the head of the run was a decent green giggle patch with a shallow seam of tittie water that looked as though it was part of the fish highway. After carefully running my fly through it, I was a little disappointed when I didn’t find anyone home, since this appeared to be the most obvious holding water.

Below that enticing little bucket two submerged boulders set up another seam that potentially contained a hotel or two. At the end of the second one I got a pull  before a familiar tick reached my finger tips from the fly exiting the fishes mouth. I smiled optimistically then made a second follow-up cast, holding my breath when the fly entered the zone in anticipation of what I hoped would come. Given the pressure this part of the river had been receiving I felt the encounter would be my send off, especially after my second cast didn’t produce any additional interest, yet I knew I still had to play the opportunity out. 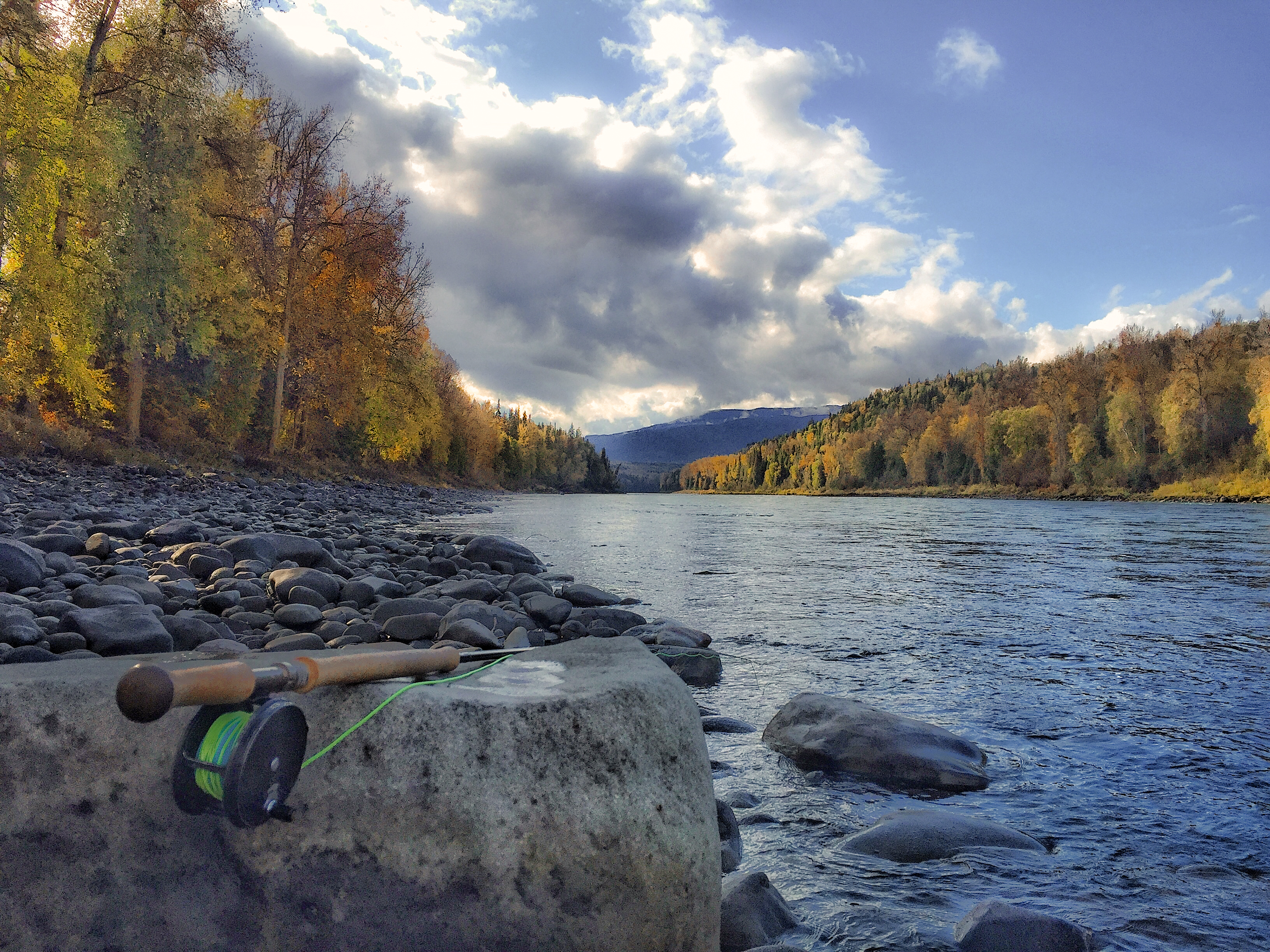 Backing up and changing flies was my next strategy. I clipped off the Thompson River Caddis and secured a small thinly dressed Doc Spratley to the leader hoping it would close the deal. Given the clarity of the water, small comeback flies had been relatively effective these past few sunny days. The grab this time was aggressive and solid. My old Hardy barked sharply in resistance, yet the line went slack just as abruptley. I hunched over, placed my hands upon my knees uttering in disbelief that the fly didn’t hold. I made one more cast before reeling in and giving the run a good rest. Once back on dry ground I lit my last cigar and went for a long walk taking in the incredible view, hoping to fill my head with the successes I had these past few weeks, but that didn’t help distract me from my despair. Half an hour later I covered the run again top to bottom. My tactic failed to produce, and given my past experiences I wasn’t surprised. Before giving up I changed flies one last time, more because I had the time than anything else, and headed to the top of the small bucket and finished out the run.  Even before making this final pass I knew that was my last grab. At the edge of the river, I took amoment to take it all in one last time, then bowed in appreciation for the grab and the opportunity to fish for these incredible fish.